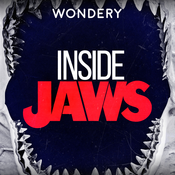 de
Introducing Blood Ties
BLOOD TIES: A scripted audio series starring Gillian Jacobs and Josh Gad as Eleonore and Michael Richland. After the sudden death of their billionaire father, disturbing allegations emerge about his dark past. These revelations thrust Eleonore and Michael into a fight they’re completely unprepared for. As the stakes of telling the truth continue to rise, they grapple with their father’s legacy and what to do with it. Listen now at&nbsp;
BONUS: Talking Star Wars with George Lucas Biographer Brian Jay Jones | 8
In this special BONUS episode, INSIDE STAR WARS creator and host Mark Ramsey interviews Brian Jay Jones, the author of the recent best-selling biography “George Lucas: A Life.” We talk about our shared love of the original film and how the franchise shaped our youths. We discuss what it’s like to chase down the details of a living legend who has contributed so much to modern pop culture. And Brian reveals the one question he would most like to ask Lucas today: “Are you happy?” It’s a fascinating conversation about the man at the center of Star Wars. Brian Jay Jones also wrote a wonderful biography of Muppet creator Jim Henson, and his current best-seller is this great book: “Becoming Dr. Seuss - Theodor Geisel and the Making of an American Imagination.” Support us by supporting our sponsors! Buffy &nbsp;- For $20 off your Buffy comforter, visit&nbsp;
Goodbyes | 7
Alec Guinness tells a child to stop watching Star Wars and drives him to tears. Kenny Baker - the man inside R2D2 - dies, but not before meeting the son he never knew. After great emotional struggle, George Lucas sells Star Wars to Disney. After a lifetime of total control, now he has to say “goodbye.” Carrie Fisher boards a plane at Heathrow Airport in London in 2016 and stops breathing before reaching Los Angeles. The world says goodbye to Princess Leia. Lucas acknowledges the fact that Star Wars used to be his, and now it’s ours. He used to live only for movies - and then he had children. Finally, a wide-eyed return to a movie theater in 1977 and the first time anyone ever saw Star Wars. Support us by supporting our sponsors! Quip &nbsp;- Quip starts at just $25 and if you go to&nbsp; &nbsp;and enter code YODA
Star Wars Will Be a Bomb | 6
Shooting on Star Wars wraps, but the troubles are far from over. Lucas has to “crack the whip” at ILM, which is way behind on FX shots. Lucas discovers the perfect voice for Darth Vader. The John Williams score is finished and Lucas is moved to tears. He screens the film for his movie friends and the reception is ugly. The FOX sales team loves the movie, but the studio board is convinced they’re wrong - Star Wars will be an enormous bomb, they believe. So they move the release date early and dump it into a small number of theaters before it’s forgotten forever. And then, Star Wars premieres and is a phenomenon. Lines around the block everywhere. Lucas vacations with Spielberg and tosses out an idea for another movie, one led by a character named “Indiana Smith.” Lucas negotiates the sequels, then takes a long vacation from Star Wars until a new series of prequels. And that’s when the backlash begins.&nbsp; Support us by supporting our sponsors! Casper &nbsp;- You can get $100 toward select mattresses by visiting&nbsp; &nbsp;and use the coupon code YODA to get 10% off any premium plan.
Days and Nights of the Force | 5
Carrie Fisher auditions hairstyles and the “Buns of Navarone” are born. Star Wars begins shooting. Carrie is smitten by her handsome co-star, Harrison Ford. Greedo nearly suffocates during the Cantina sequence. George Lucas breaks the news to Alec Guinness that his character will be killed off - without a satisfying death scene, and Guinness is furious. Luke and Leia swing across a dangerous chasm, but first someone has to tape down Carrie Fisher’s breasts. Peter Cushing as Grand Moff Tarkin is a horror legend - where does he go on his bicycle every day during the shooting of Star Wars? Shooting nears its end and George Lucas falls into depression and despair. Strife with the studio continues, and now Lucas is suffering chest pains. Star Wars is literally going to kill him. Support us by supporting our sponsors! Wix - Go to&nbsp; &nbsp;and using code YODA at checkout
Mostrar más