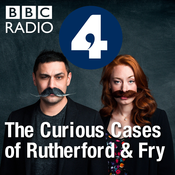 The Curious Cases of Rutherford & Fry

de
The Exotic Wormhole
"What are wormholes and do they really exist?" asks Manlee-Fidel Spence, aged 12. In this exotic episode, the doctors investigate how wormholes would work. Cosmologist Andrew Pontzen explains why wormholes could allow you to travel through time as well as space. And physicist Jim AlKhalili outlines the infinite problems this could generate. When it comes to wormholes and time travel, many science fiction stories have married solid science and successful storytelling, as Jennifer Oullette describes, but others really have defied the laws of physics. Jim also reveals why some quantum physicists now think that wormholes could be everywhere. But don't expect to jump back to 1955 any time soon. Presenters: Hannah Fry, Adam Rutherford Producer: Michelle Martin
A Cold Case Part 2
Two cold callers feature in this episode. Jennifer Langston from Ontario in Canada sent this message to curiouscases@bbc.co.uk: "My husband has just taken up cold water swimming and he'll swim in temperatures as low as 6 degrees Celsius. I worry that it's too cold for him, but he claims that 'swimming in cold water is good for you', which drives me bonkers. Can you tell us if there is any scientific proof behind this?” Adam takes a trip to his local lido and asks the locals why they get a kick out of a chilly winter dip. Meanwhile, Hannah calls the Antarctic to talk to meteorologist Richard Warren about the perils of a frozen beard. Our second cold caller, Sarah Dudley, asks why women get cold feet in bed. Thermal physiologist Heather Massey is on hand with the answer. But when it comes to the natural world, other animals are masters of sub-zero living. Frozen Planet producer Kathryn Jeffs, from the BBC's Natural History Unit, explains why polar bears are perfectly designed for the Arctic. And we discover why Paddington Bear is better suited to Peru. Presenters: Hannah Fry, Adam Rutherford Producer: Michelle Martin
A Cold Case Part 1
“I suppose a cold is called a cold because we catch it in the winter," writes Alison Evans from St Albans. "But why is it that we get more colds in winter than in the summer?” This week's Cold Case is all about the common cold, a set of symptoms caused by hundreds of different strains of cold and flu viruses. Adam uncovers the stinky history of infectious disease with medical historian Claire Jones. Virologists Jonathan Ball and Wendy Barclay describe how spiky viruses lock on to our cells, but why many of the symptoms of a common cold are due to our own body's overreaction. Plus, we delve into the science of sneezing with nose doctor Carl Philpott. Presenters: Adam Rutherford, Hannah Fry Producer: Michelle Martin
The ASMRnswer
"My question is about something I became aware of at a young age," explains Samantha Richter from Cambridgeshire. "I was sitting on the carpet at school, being read a story by the teacher. My hair felt as though it was standing on end as waves of a tingly sensation washed over my head. I subsequently found certain scenes in films had this effect, when actors were talking softly, or someone was having their hair brushed." "Then, a few years ago, I discovered that there is a name for the tingles, it's called ASMR. My question is, what is ASMR, and why do we experience it?" In this episode, we explore the world of Autonomous Sensory Meridian Response. It's a trend which has risen quickly on YouTube, with devoted subscribers following their favourite 'ASMRtists' whose videos receive millions of plays. Hannah speaks to Dr Nick Davis, who published the very first research paper on the phenomenon in 2015. And Adam is put to the test by Dr Giulia Poerio, to see if he is susceptible to the sensation of ASMR. Are there any proven benefits for devoted fans, or is it just a YouTube fad? We've concocted our very own Curious recordings so you can find out if your brain begins to tingle, You'll find them in our normal podstream, where you can enjoy Adam and Hannah crafting a very ASMRy cocktail for your listening pleasure. Presenters: Hannah Fry, Adam Rutherford Producer: Michelle Martin
Hannah's ASMR cocktail
Hannah Fry mixes a mojito. This ASMR recording accompanies the episode of The Curious Cases of Rutherford and Fry on the science of ASMR. Listen to that first, then grab some headphones and let us know if it gives you the brain tingles by emailing curiouscases@bbc.co.uk.
Mostrar más