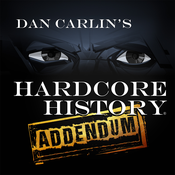 de
EP8 Caesar at Hastings
Description: Could militaries separated by ten centuries compete on a battlefield? In this alternative history experiment two armies that successfully invaded Britain a millennium apart are matched. Which side would you bet on? Show Notes:
EP7 Hardcore History On Fire
Dan and History on Fire host Danielle Bolelli do a crosscast together about Nazis, political spectrums, U.S. Presidents they want back and some other stuff. Basically it's a typical phone call between these two guys that an audience gets to hear for once. Show Notes: Mein Kampf by Adolf Hitler
EP6 On The Vietnam War with Sir Max
Description: This show comes in two parts, an overview of the Vietnam War era by Dan, followed by a conversation with famed writer, historian and war correspondent Sir Max Hastings about his experience in Vietnam and his new book on the Vietnam War.   Show Notes:
EP5 Nightmares of Indianapolis
Description: Imagine actual people living for real through the plot of several disaster and survival movies combined. That's what the crew of the USS Indianapolis experienced after it was torpedoed at the very end of the Second World War. Show Notes: 1. "In Harm's Way: The Sinking of the U.S.S. Indianapolis and the Extraordinary Story of Its Survivors" by Doug Stanton 2. "The Unthinkable: Who Survives When Disaster Strikes - and Why" by Amanda Ripley This episode is brought to you by Audible
EP4 Exposing the Hart of The Great War
Dan and the British Imperial War Museum's famed First World War historian Peter Hart talk about one of their favorite mutual interests...World War One. The Last Battle: Victory, Defeat, and the End of World War I by Peter Hart The Great War: A Combat History of the First World War by Peter Hart Gallipoli by Peter Hart The Somme: The Darkest Hour on the Western Front by Peter Hart Somme Success: The Royal Flying Corps and the Battle of The Somme 1916 by Peter Hart Jutland, 1916: Death in the Grey Wastes by Nigel Steel and Peter Hart Defeat at Gallipoli by Nigel Steel and Peter Hart Tumult in the Clouds: British Experience of War in the Air, 1914-18 by Nigel Steel and Peter Hart Bloody April: Slaughter in the Skies Over Arras, 1917 by Peter Hart Fire and Movement: The British Expeditionary Force and the Campaign of 1914 by Peter Hart The 16th Durham Light Infantry in Italy 1943-1945 by Peter Hart Passchendaele: The Sacrificial Ground by Peter Hart 1918: A Very British Victory by Peter Hart The Heat of Battle: The 16th Battalion Durham Light Infantry : The Italian Campaign, 1943-1945 by Peter Hart At the Sharp End: The 2nd Battalion Royal Norfolk Regiment 1939-1944 by Peter Hart Voices from the Front: The 2nd Norfolk Regiment: From Le Paradis to Kohima by Peter Hart This episode is brought to you by Audible
Mostrar más