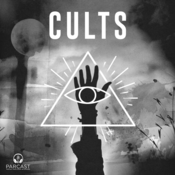 de
Cults Bites: Psychological Manipulation
In addition to new episodes of Cults each week, you’ll now also hear Crime Bites every Friday. Each Crime Bites episode gives you a deeper, yet brief look into true-crime topics covered at Parcast. Today we explore the idea of Psychological Manipulation—the tactics criminals use to deceive, coerce, and exert control over their victims. We'll dive into clips from shows across the Parcast Network, and discuss how these methods work, and most importantly, their dangerous consequences.
“The House of David” Pt. 1: Benjamin Purnell
Benjamin Purnell arrived in Benton Harbor, Michigan in 1913, claiming to be the seventh and final messenger of God. He planned to build a compound for his followers to wait for the end of the world, but he had an enigmatic past, where he learned to abuse the power he was given.
Listen First! SECRET SOCIETIES, A Parcast Original Series!
They’ve been around for thousands of years…orchestrating some of history’s most controversial events. And if not for their radical actions, you may never have even known they existed. Every Thursday, take a journey through hidden passageways and become a member of Parcast’s diabolical series, SECRET SOCIETIES. Each society is explored in 2 episodes—exposing the people and context responsible for its founding, and analyzing the psychology behind their beliefs. Enjoy this exclusive clip from the first episode on Yale’s mysterious “Skull and Bones” fraternity. To finish this episode, subscribe to SECRET SOCIETIES free on Spotify, or wherever you listen to podcasts!
“The Virtual Reptilian Cult”: Sherry Shriner
Sherry Shriner believed Satan disguised himself as Jesus and subsequently tricked the world into praising him. So she became the virtual leader of an online Reptilian ET Cult that believed demonic, alien reptiles were sent by Satan to take over the world.
Best of 2019: “The Source Family” Pt. 2: James Baker
Here’s one of our listeners’ most requested episodes of 2019: When the cult moved to Hawaii, James Baker never expected his penniless followers to find him. But once it became clear that they were willing to follow to the bitter end, he began planning a dramatic exit of epic proportions.
Mostrar más